What if You Said Hello to Everyone in Your Path?


What If You Said Hello to Everyone In Your Path?

Large things you can learn from one small change.

Hello. It's one of those universal words, yet it's one of the last ones we think to use as adults. In our never-ending rush to get something or somewhere, it seems we don't have time anymore for this most basic of gestures. And that's unfortunate, because saying hello is more than just saying hello. It is an acknowledgment of existence. It is a pause, however brief, to affirm another's worth (and have yours affirmed in return). How might the world change-how might we change—if we mastered this word?

1. Get rid of the judgment. Age gives us a crust, like the film on refrigerated pudding. Even though we may still be soft deep down, that's not what others see and on many occasion not what we see. I, for one, look a lot less friendly as a refined Hispanic woman but I am actually really dorky and really approachable. It just takes a moment to realize that. So it is always best to not prejudge.


2. Friendliness is so rare nowadays, it's disarming. Because people aren't accustomed to being greeted, I found it a sneaky way to grab their attention and get what I wanted. For instance, when I began an e-mail with "Hi," I was more likely to get a reply. And when I said hello to cashiers and clerks, I got better service. It's as if I woke them up to my presence. 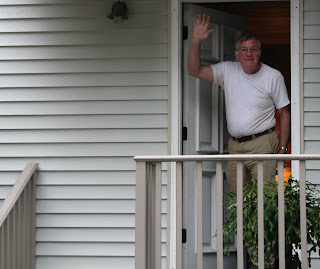 3. Cheesecake Philosophy. I find sometimes when people fight about cheesecake it is not always about cheesecake. That simply means sometimes we tend to dive into the conversation at hand instead of realizing it’s a deeper issue. For example the cashier at the grocery store may seem rude but in reality she has her little one sick at home and is distracted. So be kind to people you never know what people are going through and remember we are all in this together.

3. It can boost your mood. You will be surprised once you open yourself to others you can’t stop. It prompts you to feel good about yourself, builds your courage, builds connections, and not to mention when you smile it makes you beautiful.


4. People you wouldn't normally acknowledge turn out to be the friendliest. The gnarly, the dirty, the semi-strange … in other words, the people I'd normally avoid or not even notice were the ones who are the most warmly. No doubt it's because they're so accustomed to being ignored that the acknowledgment is pleasant to them.

5. Respect begets respect. I normally run or bicycle the same route at the same time each day. When I started waving to the drivers who passed, an unusual thing happened: After a few days, they not only started waving back, but they also gave me a wider berth. So my workouts became more pleasant and safer. It is because you became a person to them and that’s a great feeling for both parties.


6. Reaching out focuses you. The simple act of saying hello continually pulled me back from wherever my mind had wandered and forced me to be more aware. It's social Zen.


7. It can save your marriage. Think to yourself “when was the last time I greeted your spouse”? I never realized how infrequently I greeted my spouse, or the rest of my family, until I started doing so deliberately. Common courtesy isn't so common.

8. It's a form of universal health insurance. It's impossible to say hello without smiling. One leads to the other just as a tap causes a knee jerk. And smiling has been clinically shown to lower blood pressure, boost immunity, and even release natural painkillers (endorphins), each of which lowers stress, boosts happiness, and improves health. Apparently, a smile creates a similar effect in the recipient. So smile and say hello it makes us all feel better.

Maybe we can make the world a better place by just saying hello. I find when I do, I feel lighter and more connected and I have a better sense of well-being. Once I broke through my initial crustiness and got into the habit, it even became a game: Can I make this grump open up?


So start saying hello, there's no need to greet everyone you meet. That can be exhausting. Instead, pick an arbitrary number—say, eight—and make it your goal to say hello to that many strangers daily. Build from there. And don't forget to acknowledge the most important stranger of all: Saying hello to yourself each morning in the mirror recognizes the one person who needs it most. 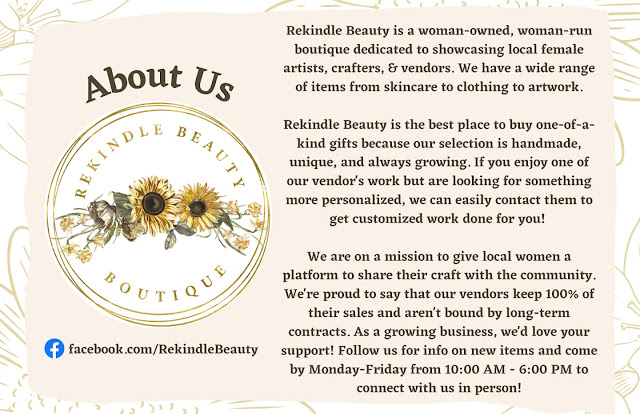 A little about us..

Have you been by our boutique lately? You should. We are now officially open with new products coming in weekly from local women artists, crafters, and vendors. Jewelry, fashions, home decors, bath products, children's items, doggy dresses, tumblers, kitchen items, and so much more. Come on by. We would love to see you. Follow our Facebook page to see all boutique updates, sales, and events. https://www.facebook.com/RekindleBeauty #shopsmall #shopsmallbusiness